The menstrual cycle is made up of two states, ovulation and menstruation.  Between these two sides are the transition periods from being in one mode to its very different polarity. The graphic and table below provide a few keywords that can be used to describe the opposites. 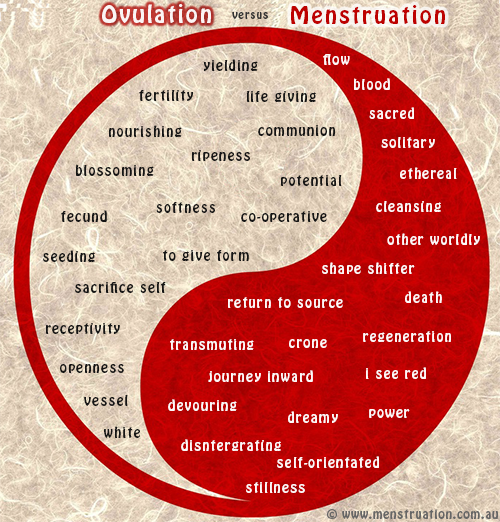 At Ovulation there is a ripeness and receptiveness to giving something physical form, the readiness to merge with another and nourish a new life into being, to participate in the act of generation.

At Menstruation this potential new life dies and is released. It is a more solitary event, woman may be receptive but it is not for union with another human but more a desire of union with herself or God/Spirit. It is a time for cleansing and release, a time of regeneration and preparation for the next cycle.

These two events describe on a microcosmic level the basic birth – death -rebirth cycle that is embodied everywhere in the natural circle of living beings on this planet. We can easily compare it to plants: a plant as a seed begins to grow, it matures, flowers (ovulation), drops it seed (regeneration / menstruation) and dies back into the soil. With the plants physical form in death acting as the nutrients for the next new plant (its seed) to grow again.

So why is it that so many women have difficulty with their menstrual cycles?

Why is it that the motherly /ovulation phase is exalted and made good whilst the bleeding phase is called a curse?

Part of the answer is modern humanity’s disconnection from nature. So few of us interact physically or personally with natures rhythm anymore. We live in a linear or harvest mindset where constant growth is expected and desired, a youth culture where any sort of decay or atrophy is avoided.

Think of the way we gather food these days, we go to the supermarket and are surrounded by constant abundance and harvest… it is always there. And if a fruit or vegetable is not seasonally availble where we live, it is flown in from another part of the planet where it is in season and available. It is a way of life now, we don’t even think about it. I’m not saying that this is necessarily a bad thing either, it simply serves to further remove us from any natural affinity to living in a cyclic world.

When we had to grow our own food and raise our own animals, we were intimate with the birth – death- rebirth cycle. We knew there was a time to plant and a time to harvest and a time for rest. Life had rhythm. Our bodies had rhythm and it was easier to accept this rhythm as a natural and pure occurrence. Now a cyclic phenomena is spurned and denigrated as primitive and unnecessary.

So what purpose does a cyclic experience serve?

Personally I feel the cyclic wheel promotes optimum health by allowing living organisms to regenerate and re-nourish themselves. Farmers using rotation cropping rested their soil, they used the land for 3 years or so and then mulched it (with decaying matter) and let it rest so that it would be able to continue to nourish and grow the plants in the highest manner.

Ideally this is what the menstrual phase represents for women, a time to rest and regenerate the creative medium in our lives. And it is this rest and regeneration, the supposedly unproductive portion of our menstrual cycle that is most frowned upon and that most women are totally disconnected with. And the catch 22 is that because women are disconnected from their bleeding cycle, they do not consciously use the time to regenerate themselves and thus become less productive, creative and joyful in the long run.

The point here is not that one phase of the cycle is more valuable than the other, it is simply that the two phases are equally valuable, very different and complimentary. Using the menstrual cycle is an exercise in staying flexible and flowing. For a short time we are out there, open, receptive the nurturer and then for an equally short time we are in here, quiet and the nurtured. Harvest and rest, Harvest and rest.

Back to the question of the transition phases and why do women experience discomfort and pain pre menstrually or pre ovulatory?

Lots of reasons, part of it seems to be tied up with our cultures harvest mentality and some of it is the cultural expectation on women to be “good and nice girls”, who always take care of the other and put their own needs last. Some women experience so little self esteem and value in being a woman and become so identified with their role as Mother and attached to the Ovulation phase, that the transition to the less fertile time is tinged with fear, guilt and anger. Other’s have totally absorbed the cultural messages of menstruation and our blood being a bad and dangerous thing that they too dread being reminded that they bleed. Other women have simply been taught that menstruation is painful and a curse, that it has no value and therefore it is experienced as just that.

The women experiencing symptoms at the other end of the scale, at the pre ovulation phase, may have trouble conceiving. Perhaps they have subconscious issues with their own mothers or becoming mothers, or a traumatic past in which they were not nurtured. They may have a history of sexual abuse or terminated pregnancies and therefore the phase of being fertile becomes problematic. Perhaps the issues of nurturing come to the surface as a physical symptom and dietary deficiency where a woman just does not know how to provide nourishment for herself so that her body functions healthily. I am not saying that any of these issues affect all women who experience pain at ovulation and I am not making light of the pain that women experience when they wish to conceive and cannot.

One thing has become very clear to me, and that is that a woman’s relationship to her menstrual cycle speaks volumes about her life in general. The scenarios above aren’t always correct because each woman is an individual but any symptoms or moods are a clue to what is really going on in a woman’s life. When we get in touch with our menstrual cycles and learn to ride its rhythm and listen to the messages it gives us about our lives, we experience more balance, self esteem, personal power to make choices about our lives and what we want and ultimately become more productive in creating the type of life we really desire.