Sasmar Conceive Plus is the ideal conception lubricant because it has been scientifically designed to match the chemical make up of cervical mucus and sperm. 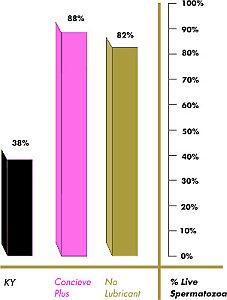 Conceive Plus is pH and electrolyte balanced to imitate your body’s natural fluids which means sperm can travel freely and arrive at the egg in perfectly healthy condition increasing your chances of conception.

This graph shows how many sperm are still alive after being incubated for a time in ConceivePlus as compared to KY and optimum cell culture with no lubricant.

Other lubricants can interfere with conception – either killing sperm or slowing them down. Conceive Plus helps sperm complete their journey. 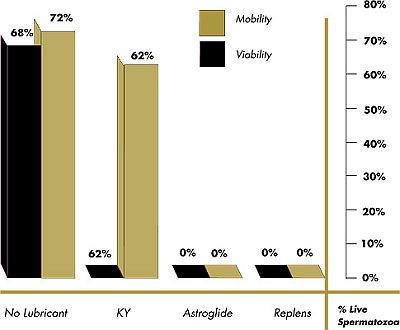 This graph shows how sperm are affected in terms of viability and motility by other lubricants – KY, Astroglide and Replens compared to Conceive Plus.

If the sperm cannot travel then fertilisation will not occur and you will not get pregnant.

Conceive Plus is the only personal lubricant that includes Calcium and Magnesium ions. These ions are present in all bodily fluids and are essential for cell viability and the process of fertilisation.

As a woman approaches ovulation her body changes as it prepares for possible fertilisation. Your cervical mucus changes, increasing in volume and density.

Cervical mucus acts like a stop / go barrier. When it is thick (at times other than ovulation) it slows sperm down and makes it harder for fertilisation to take place (imagine sperm swimming through peanut butter).

Conceive Plus acts like fertile cervical mucus – it is similar in composition and it helps carry the sperm to the waiting egg.

Using Conceive Plus lubricant helps you to overcome conception problems because it gives your partners sperm the best possible chance of arriving at your egg.

This can be very helpful if you suffer from low mucus levels caused by hormonal changes, stress or medication.

Lubricant helps you get in the mood.

Creating a baby should be a passionate and romantic event. Sadly though, if you have been trying to conceive for awhile passion and romance can become a distant memory.

Sometimes you need a kick start to help get in the mood for love. You can use Conceive Plus to help you get your motor running without worrying that it will ruin your chances of getting pregnant.

Conceive Plus helps you to get pregnant because it – 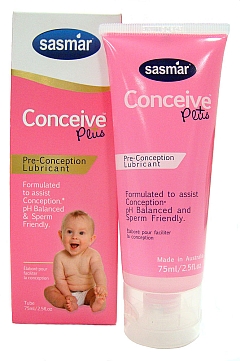