Cervical Mucus is one of the most important indicators of fertility because it changes throughout the menstrual cycle from being dry, thick or pasty (infertile) to being wet and slippery (fertile).

It is these changes that will warn you of approaching fertility. 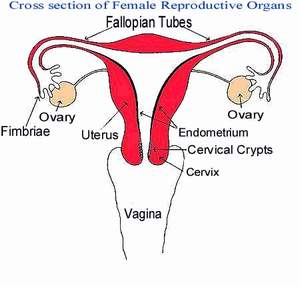 By examining the diagram above (which is not drawn to scale) and thinking about the biology of menstruation described in the previous pages, it is easy to see how important the mucus located in the cervix is. The sperm has to travel through the cervix to get to the egg.

Cervical mucus acts like a STOP / GO signal or barrier for incoming sperm.

Your cervical mucus will either stop sperm or allow sperm through to fertilise one of your eggs. It all depends on the state of your mucus at any given time.

When observing mucus, ask yourself the question “Could a sperm swim through this type of mucus?” It will help you to decide if you are fertile or not. Mucus that is dry and thick is not as easy for sperm to swim through than mucus that is wet and slippery.

Getting to know your body and its types of mucus is a very important step .

Different women have different symptoms or characteristics of mucus. Differences in:

So it is only by knowing your own personal pattern that you can determine your fertility status. This is where your use of a useful charting system becomes vital.

By observing and keeping a record of your mucus changes, moods and other symptoms over a few months you will get a very clear picture of what your body does during your menstrual cycle. This can be done easily through using a fertility app or by keeping a paper based chart.

For some women the change is not so distinct – they do not ever get really wet profuse mucus but they do see a change. This is why it is so important to take the time to learn the signals your body gives you – it might not be the same as someone else’s or what you have read in a book.

You will recognise its rhythm and have a much better idea of when is a good time to try to conceive.

Dry or no mucus = non – fertile

The changes from dry to wet indicate that your fertile phase is coming so this is the time to try for that baby. Sperm can live for up to 3 days in fertile mucus, therefore trying to time intercourse so it occurs a day (or closer) before ovulation is a good guide – unless you are using gender selection methods. This means the sperm are not too tired by the time the egg is ready.

After ovulation (your fertile peak) has occurred, mucus will dry out again and return to its non fertile state.

Factors like the presence of sperm, vaginal infections, cysts, drugs and so forth can affect mucus production or in the case of sperm, mask the presence of mucus. So remember to write down any illness, and frequency of intercourse so your records are accurate.

In addition, remember that factors like stress, sickness can also delay ovulation. In this case, you may experience fertile symptoms, then they decrease, only for the symptoms to re-appear a couple of days later. It is important to treat any signs of fertile mucus seriously if you are trying to avoid pregnancy. That is, just because you think you should have ovulated doesn’t necessarily mean you did if fertile symptoms re-appear.