My story has actually has two beginnings: the first one being when I first started menstruating a long time ago and the second about 20 years ago when I resumed menstruating after the birth of my children. 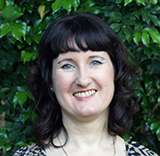 In that 5 years I was pretty happy not to have to deal with menstruating. I still looked upon my periods as a hassle, an inconvenience and a shameful reminder of my being a woman…all this a legacy from my mother, a catholic upbringing and what I had absorbed from my environment since I first bled.

I still remember that day… I knew that one day I would start to bleed, and my friends talked about it at school but when it happened I was still shocked and scared. When I told my mother it was as if I had done something wrong. I felt like I had to hide it and she warned me that now I had to be careful not to “get into trouble” with the boys!..whatever that meant to an eleven year old.

So I stayed scared and thinking about it now, I hated having my period although I would never have admitted it to myself. I thought I was pretty together about it all. At the same time subconsciously I think, I did feel a secret thrill that I had this monthly visitor, it was kind of reassuring that it was there and of course when I became sexually active it was a great relief when it would arrive each month…I was safe, I hadn’t got into “trouble”! What a Pandora’s Box of mixed emotions!

So there I was my periods were back for good, and in that 5 years I had undergone alot of changes on many levels, mostly due to the huge impact becoming a mother had upon me and all the adjustments that process entailed! My views on health had changed to really encompass the mind, body, and spirit connection.

I saw the resumption of my menses as an opportunity to put some new ideas into practise, but I needed to get specific so I started researching menstruation . . I went Surfing.

One of the first sites I visited was S.P.O.T, I became angry and decided not to use commercial pads anymore, I switched to organic tampons and cloth pads. I discovered that by using the cloth I did not suffer any irritation to my tender bits as I had previously, something I had just put up with thinking that it was normal and that there wasn’t any other options open to me anyway.

I read further and was amazed and delighted that some women enjoyed their ‘moontime’, that in some cultures it was held sacred and considered an integral part of a woman’s spirituality.

I really liked this other way of looking at my ‘moontime’, I began making small changes to my own beliefs around menstruating, being female and how I treated myself during the whole cycle. For example, using cloth pads really keeps me grounded in the actual physicality of bleeding, sewing the pads, looking at my blood, washing the pads and recycling my blood onto my garden (keeping me connected to the Earth) helping me to focus on letting go. I don’t use cloth all the time, my other alternative is organic cotton tampons or the Yoni Sea Sponge Tampon. But when I am at home I do use pads because it is important for me to maintain that connection, and minimise my exposure to more toxins and commerciality.

I started doing this web page about 16 years ago because I felt that this was really important information that more women needed to know about. It has taken such a long time to finish it, (I haven’t really finished it… it is now years later, and I have been working on it continuously on and off, and trying to make it better and broader), because it has also been about my process and my journey of healing my relationship to my menstrual cycle.

I had to go through emotions of anger, sadness, shame, disappointment, forgiveness, aswell as joy and triumph.

At times it has been confronting and uncomfortable .. because ultimately our moontime is an expression of and a gift from the great Feminine, and like her it can be dark, messy, chaotic, upsetting to our schedules, creative, destructive and usually not always like what we’ve been taught in Patriachy that the feminine is ie. sweet, nice, and loving. But these qualities of chaos and mess are sometimes what we need to overcome the rigidity and limits imposed upon us, and I think in the end that’s alot of what my journey was about, coming to grips with the Feminine nature and accepting Her (and me) in all Her forms. It is not always easy and my journey is not complete yet, but so far my life has been enriched immeasurably. I hope that it does yours too.

Where am I at now??? This website has grown to the form that

it is now in, and we reach thousands of women each month. This gives me great joy and pleasure to know that people are enjoying the site and find it worthwhile.

I maintain my initial belief that the menstrual cycle is very important in a woman’s life and my passion for its value has not waned even though other work commitments take up more time.

Now I am in my mid forties – the next step in the journey is peri-menopause and menopause which I think will begin soon based on what I have been observing. So that will be a whole new adventure.